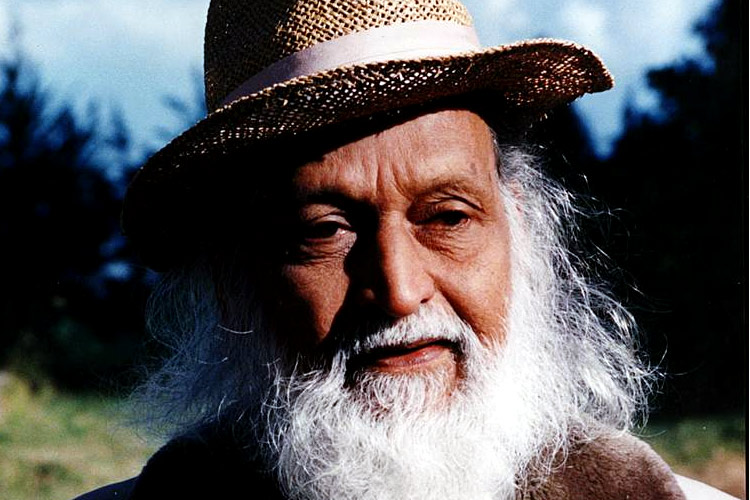 Dada Gavand was an Indian mystic, guru, traveller, photographer, and author. For much of his life he lived quietly in solitude. He is the author of four books.

Dattaram Madhavrao Gavand was born in Bombay (Mumbai) in 1917. The eldest child of his parents, he came to be called Dada or elder brother.

Early in his life, he heeded a compelling inner urge for spiritual understanding. On account of his father’s untimely demise, he inherited the family business at the young age of 18. He ran the business very successfully but became disillusioned with the exclusive nature and binding effect of wealth, prestige and comfort. He saw the dehumanizing effect of commercial culture and also the limitation of tradition. He saw marriage as a glorified trap. Hence he chose not to marry and at the age of 38, after carrying out his family responsibilities of getting his 5 sisters and only brother married and settled, he went off by himself, in search of the true significance of life. He read the work of Theosophists like Madame Blavatsky and Annie Bessant. He also personally met J. Krishnamurti, Ramana Maharshi and the Mother of Pondicherry.

After some years of wandering, and many times of trial and testing, Dada finally realized to his amazement that the search was indeed totally within. Hence, in the year 1955 he left his cozy home, went far away from Mumbai to Mount Sajjangad, stayed in a tiny hut there and began an inquiry unto himself. Dada's autobiography contains a full account of his awakening.

By being with himself in watchful attention, Dada faced himself totally. Without following any prescribed discipline, he saw the activity of his own mind very aloofly, and questioned the projections and workings of the entire mechanism of mind.

In Dada’s own words, “I had to be with myself wholly in order to face myself. I was confronted with the play of ceaseless and countless thought–desires. By watching the drama of thought-mind, without getting involved in it or carried away by it, I began to understand the whole content of myself.

“As I was observing the play of my mind, I suddenly realized that the established pattern of thought-emotion was disturbed, and the whole mind-structure was in turmoil. There were no layers, no orderly arranged movements of thought any more. Intellect and logic lost their validity, and the consciousness was in flux. Everything was in intense motion, like boiling water.

“The ego itself became highly disturbed, agitated and sensitive. I came face-to-face with fear. I had to sense that fear fully and stay with it without reacting to it. With this challenge, my watchfulness and alertness grew much deeper, keeping me in the moment of the present, creating room — a space in my inner being — to absorb the thrust of thought. This was a prelude to change – a jump.”

Such a jump, beyond the mind, appears to be a totally unpredictable and unexpected occurrence. As Dada describes, “Something inside me literally exploded, giving me the shock of my life. In a split second, a fountain of unknown energy sprang forth from within. This surprising energy flow was of a truly new kind, different from anything I had ever sensed or experienced before. It felt soft, sensitive, joyful and dynamic yet peaceful. It filled me with profound reverence, deep awe and love. Such a mystical and powerful explosion in my inner domain was a miraculous event.”

With this change in Dada’s life came a tranquility, joy and understanding never known to him before. Moreover, his creativity increased manyfold and he began to compose poetry. Thereafter, he continued his inner journey, staying in semi-solitude for 19 years in a small cottage in Mahableshwar.

Intuitive Intelligence, A Play: Within and Without

How Dada Gavand Woke Up

Dada Gavand explains with remarkable precision exactly what he did that led to his waking up. Excerpted from his autobiography, Intelligence Beyond Thought.

Intelligence Beyond Thought: Exploding the Mechanism of the Mind

In our view, this autobiography is one of the most important books ever written about enlightenment because it contains an extraordinarily precise description of what the author did that led to his waking up. This portion of the book may be the clearest and most informative depiction of sadhana, of spiritual practice, that has ever been written. The author shares with us the whole concrete experience so we are able to see not only what he did but also how it felt. We also see the ferocious intensity and motivation that were required to make the practice work. He put his whole life aside to focus on this one thing, his sadhana.

It’s a big book, written in an engaging, candid style, with many other interesting sections. We recommend it highly.